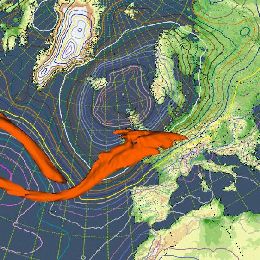 Extratropical cyclones, sometimes called mid-latitude cyclones or wave cyclones, are a group of cyclones defined as synoptic scale low pressure systems that occur in the middle latitudes and are associated with fronts (cold front, warm front and occlusion) and horizontal gradients in temperature and dew point , known as baroclinic zones. Extratropical cyclones are the everyday phenomena which, along with anticyclones, drive the weather over much of the Earth, producing anything from cloudiness and mild showers to heavy gales and thunderstorms. Evolution of these depressions can be recognized in the developing of the cloud systems. These cloud developments are the footprints of physical processes in the upper air. In case of explosive deepening it is called rapid cyclogenesis. Satellite imagery, especially recognition of cloud patterns and water vapour structures, can be a great help for marine forecasters to find the area where these cyclogenesis occurs. The deepening of the depression, where you can expect the strongest wind speeds at sea surface and what will be the distribution of the precipitation are issues which will be covered during the lecture. In general, the lecture will give insight in physical processes which can explain the development and life-cycle of rapid cyclogenesis by using single channel satellite images and RGB-images in combination with NWP model fields.